We use cookies and other tracking technologies to improve your browsing experience on our site and to analyse our traffic.
More Info Accept 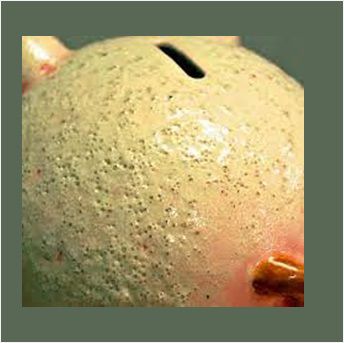 Rough, grainy or bubbled surface on glazedwares - appearing after firing.

Blisters can also show up as a rough, grainy, blistered, bubbled, cratered or surfaces with "holes" or bald patches in the glaze following firing.  Sometimes the glaze or fired piece looks like it is covered in large bubbles similar to honeycomb.

Blistering appears as a pronounced, sharp-edged burst bubble and looks like a crater on the fired glaze surface, often revealing the underlying bisque pottery or clay body and sharp edges around the blister.

Pinholes result in tiny craters with soft edges; in comparison, blisters result in slightly larger craters with sharp edges.  Go to our pinholes article if you believe you may have this issue.

The most common reason for blistering is an overly thick application of glaze.

If there is blistering over your underglaze decoration then potential causes can be:

Blistering is a glaze defect similar to pinholing and pitting. As the glaze melts, gases vaporize out of the clay and glaze. In essence, blisters are the result of the glaze being frozen in the midst of boiling.

In most instances, this out-gassing is completed and the glaze flows back together to form a smooth surface by the time the kiln has reached temperature. However, too much gas or too viscous a glaze may interfere with all the gas being released in time for the glaze to smooth back out. In such cases, blistering is likely.

We are fully compliant with the GDPR laws. We promise to safeguard your data and protect your privacy rights.